Objective: Adrenocortical carcinoma (ACC) is an aggressive tumor that accounts for 0.02% of all reported cancers. ACC commonly arises in a sporadic manner, but may also manifest as part of a familial syndrome. Regardless of the setting, ACC rarely arises concurrent with other malignant tumors.

Methods: In this report we describe a 32-year-old woman who on work-up for abnormal vaginal bleeding was diagnosed with synchronous uterine adenocarcinoma, ovarian adenocarcinoma and ACC. We also provide a literature review of the past 20 years to identify other patients with ACC and synchronous malignant tumors, and those with familial syndromes associated with an increased risk of developing ACC.

Results and Conclusions: To our knowledge this is the first report of a patient with synchronous malignant tumors of the uterus, ovary and adrenal gland. Review of the literature revealed only 5 other cases in which a patient had concurrent ACC and malignant tumors in other organs.

Adrenocortical carcinoma is a rare tumor with an estimated incidence of 1-2 per million per year. (1) It affects women nearly 60% more often than men and accounts for only 0.02% of all reported cancers. (2) These tumors arise with a peak bimodal age distribution during the first and fifth decades of life and 2-10% can be bilateral. (2-4)

The clinical presentation varies, ranging from vague, non-specific abdominal or back pain to overt hormonal syndromes when the tumors become biochemically active. Between 57 and 67% of patients present with either local invasion or widely metastatic disease. (4, 5) The most common hormone secreted in ACC is cortisol, resulting in Cushing's syndrome. Steroid overproduction is present in about 60% of patients with ACC. (6) In children, virilizing tumors are the most common functional adrenocortical tumors and account for 20-30% of ACC. Despite our surgical, medical and chemotherapeutic advances, the overall prognosis of patients with ACC is dismal, with a 5-year survival of less than 35%. (7)

Most ACCs arise sporadically; however, ACC does develop as part of a constellation of tumors in inherited familial cancer syndromes. The most commonly reported include the Li-Fraumeni Syndrome (8), Beckwith-Wiedemann Syndrome (BWS), Gardner Syndrome, and Multiple Endocrine Neoplasia, type 1. (9) Each syndrome is associated with a unique germline mutation. The commonality, however, is their inherit risk of developing ACC. Despite the risk of developing ACC in an inherited fashion, the risk of developing synchronous ACC with other malignant tumors is exceedingly rare. We report a patient who was diagnosed with synchronous ovarian cancer, uterine cancer and ACC.

A 32-year-old woman with a history of vaginal bleeding presented to a referring hospital with edema of the left lower extremity. A computer tomography (CT) scan of the pelvis showed a left pelvic mass and a deep venous thrombosis. She underwent a uterine biopsy which revealed a grade I endometrial adenocarcinoma. A staging CT scan demonstrated a heterogeneous central and left pelvic mass measuring 16.8 x 14.8 cm and a 14.5 x 10.7 cm left adrenal mass. (Figure 1) Before she was referred to our institution, a biopsy of the adrenal mass was done to exclude hormonal overproduction and interpreted as consistent with an ACC. Magnetic resonance imaging further delineated the pelvic mass as two separate masses: a 2.3 cm uterine mass and a 15.5 x 15.3 cm left adnexal mass. (Figure 2) 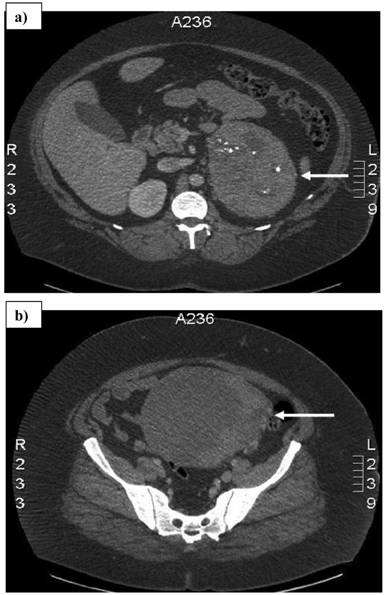 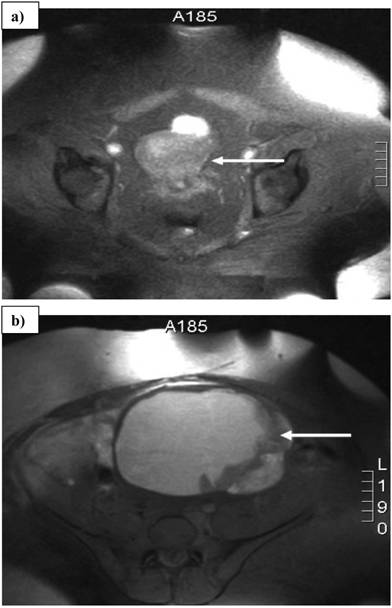 Before surgery at our institution, an inferior vena cava filter was placed and hormonal activity was excluded from the adrenal tumor. The patient underwent an exploratory laparotomy, total abdominal hysterectomy, bilateral salpingo-oophorectomy, pelvic lymph node dissection, omentectomy, abdominal washing and left adrenalectomy via a midline incision. Final pathologic examination revealed a stage I endometrioid adenocarcinoma, stage I adenocarcinoma of the ovary and a stage II adrenocortical carcinoma. The adrenal tumor displayed 5 of 9 Weiss criteria (10) for malignancy: abundant necrosis, high mitotic count, atypical mitoses, nuclear pleomorphism and a diffuse architecture. The tumor did not exhibit the remaining criteria of non-clear cytoplasm, vascular invasion, capsular invasion or sinusoidal invasion. The patient received postoperative chemotherapy consisting of 6 cycles of paclitaxel and carboplatin. Mitotane was not given. She remains free of recurrence at 8 months after surgery.

The vast majority of ACCs arise sporadically, but ACC can develop in association with familial tumor syndromes. Patients with these inherited syndromes have an increased risk of developing ACC, but the diagnosis of synchronous ACC with other cancers in these families has not to our knowledge been described. The following syndromes are associated with ACC:

Li-Fraumeni Syndrome (LFS) is an autosomal dominant disorder caused by a germ-line mutation in the TP53 gene located on chromosome region17q13.1. A mutation in this gene results in the inability of p53 to initiate cell growth arrest and DNA repair. (3) The resulting cascade of events leads to the formation of a myriad of tumors including soft tissue sarcomas, osteosarcomas, breast cancer, brain tumors, and leukemia.(9) ACC develops in approximately 3-4% of patients with LFS, most commonly in those under 20 years of age. (3)

The Beckwith-Wiedemann Syndrome (BWS) results from an epigenetic dysfunction of the chromosomal region 11p15. This syndrome arises most often sporadically, but 15% of cases are familial. (3) The genes located in this region are the insulin-like growth factor 2 (IGF-2), cyclin-dependent kinase inhibitor 1C (CDKN1C, p57kip2), and H19. (3) Abnormalities in these genes result from parental imprinting that causes a gain in the paternal allele and loss of the maternal allele. This leads to the overgrowth sequela that is characteristic of BWS. Patients suffer from macrosomia, exomphalos, macroglossia, abdominal wall defects, ear anomalies, renal abnormalities, and cleft palate. Patients also develop nephroblastoma, hepatoblastoma, rhabdomyosarcoma and nesideoblastosis. Additionally, ACC arises in 5% of patients with BWS. (3)

Gardner syndrome (11) is a disorder inherited in an autosomal dominant fashion that results in an inherit risk of developing colorectal cancer. This syndrome results from mutations in the APC gene in the chromosomal region 5q21. (3) The manifestation of this syndrome was first described in the early 1950's as a combination of gastrointestinal polyps, osteomas and soft tissue tumors. (12) This syndrome is characterized by epidermal cysts, gastric and duodenal polyps, desmoid tumors, periampullary cancer, and about 2% of women with this syndrome develop a crifiborm type of papillary thyroid cancer. (13) Adrenocortical carcinoma also affects individuals with Gardner's syndrome. Few cases have been described in the literature since the original report by Marshall (14), so the precise prevalence is unknown.

Multiple Endocrine Neoplasia 1 is a syndrome resulting from mutation in the MEN1 gene located in the chromosomal region 11q13. (9) The resulting mutation leads to a defect in the MENIN protein, leading to the formation of pituitary tumors, parathyroid tumors and pancreatic neuroendocrine tumors, as well as adrenal tumors, multiple lipomas and angiomas. Adrenocortical tumors develop in 55% of people affected with this syndrome; the majority being adenomas and less commonly ACC. (3)

Synchronous tumors appear to develop independent of familial syndromes. The genetic abnormalities in these syndromes and subsequent development of metachronous tumors raise the suspicion for a genetic component. Two patients showed a mutation of the p53 gene; one showed a single base substitution in codon 248 (17) and the other had a mutation at codon 273. (18) Our patient underwent molecular testing for possible Lynch syndrome, given the high association of endometrial cancer with this syndrome, but she was not found to have microsatellite instability. Additionally, the patient was found to not have a mutation of the p53 gene.

To our knowledge, this is the first report of synchronous cancers arising in the adrenal gland, uterus and ovary. This is the only patient who has been diagnosed with synchronous tumors from the 50 (2%) patients in our ACC tumor registry. Furthermore, no patients were diagnosed with metachronous tumors arising within a year of ACC diagnosis. This denotes not only the rarity of ACC, but also the rarity of developing synchronous cancers.

Reports of patients with ACC and synchronous malignancies

We would like to thank Pamela Derish for her help in editing this manuscript.