Among these subtypes, inflammatory and pregnancy-associated breast cancers have the most aggressive clinical course, in which many tumors had undergone extensive invasion or metastasis at the diagnosis [3-6]. In sharp contrast, small tubular and mucinous cancers have the most indolent clinical course, in which most pre-invasive cancers do not progress during patients' lifetime [1,2].

Breast cancer also has a highly variable profile of molecular and immunohistochemical signatures, and could be roughly divided into 5-categories based on their expression of estrogen receptor (ER), progesterone receptor (ER), human epidermal growth factor receptor-1 and 2 (HER-1 and 2), and cytokeratins 5/6 (CK 5/6) [7-9] (Table 2).

Breast tumor morphological heterogeneity. Sections from 4-different human breast tumors were stained with H&E. Note that although all are ductal carcinoma in situ, each has its unique morphological features.

The mechanism(s) accounting for breast cancer heterogeneity remains elusive. However, two previously introduced theories, cancer stem cells and clonal evolution, appear to have provided some reasonable explanations. The theory of cancer stem cell was originated by Cohnheim in 1875 [10]. The main concept and major steps are depicted in Fig 2.

The theory of clonal evolution was introduced by Nowell in 1976 [11]. The main concept and major steps are depicted in Fig 3.

The theory of cancer stem cells for breast cancer heterogeneity 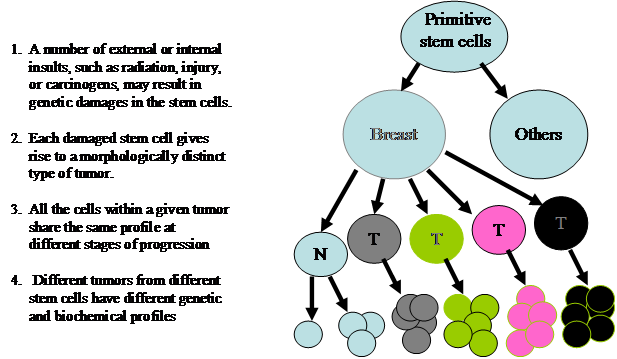 The theory of clonal evolution of breast cancer heterogeneity 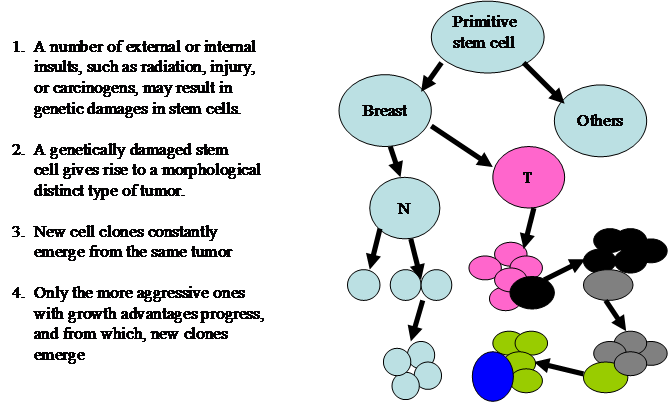 These theories share a number of similarities, including: (1) both believe that cancers are originated from cancer stem cells;(2) both believe that specific genetic or biochemical abnormalities are needed for carcinogenesis, and (3) both believe that the tumor microenvironment substantially influence the processes of carcinogenesis and tumor progression. However, these theories differ fundamentally in the main concept. The cancer stem cell theory believes that different tumors result from different stem cells, and that all cells within a given tumor could progress to a higher degree of malignancy. In sharp contrast, the clonal evolution theory believes that different tumors are originated from evolution of a single stem cell and that only the more aggressive clone progresses.

3. Proofs for each theory

The cancer stem cell theory is supported by several lines of evidence, including:

A. Different lobules have different morphological and immunohistochemical profiles

B. Malignancy-associated alterations in isolated lobules

Together, these findings suggest that different lobules are likely to arise from different stem cells, which constitutes the molecular base of heterogeneity for tumors subsequently derived from these lobules. This speculation is in total agreement with our previous findings in surgically operated rat submandibular glands with an integrated immunohistichemical and autoradiographical approach, which revealed the formation of morphologically and immunohistochemically unique new lobules within the residual gland by stem cells [13,14] (Fig 6). 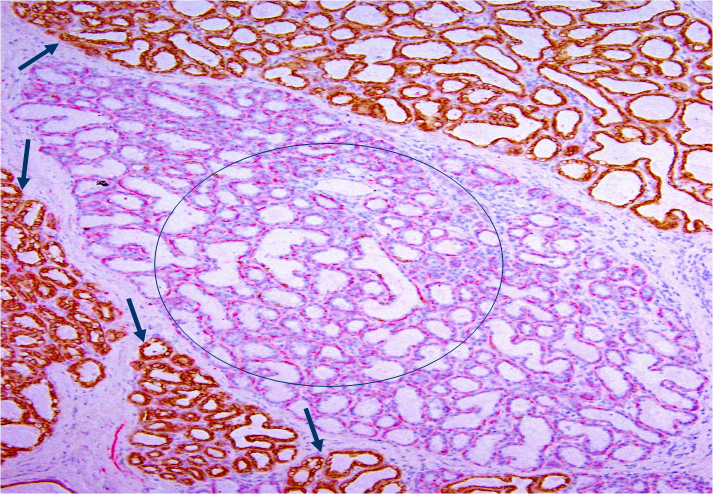 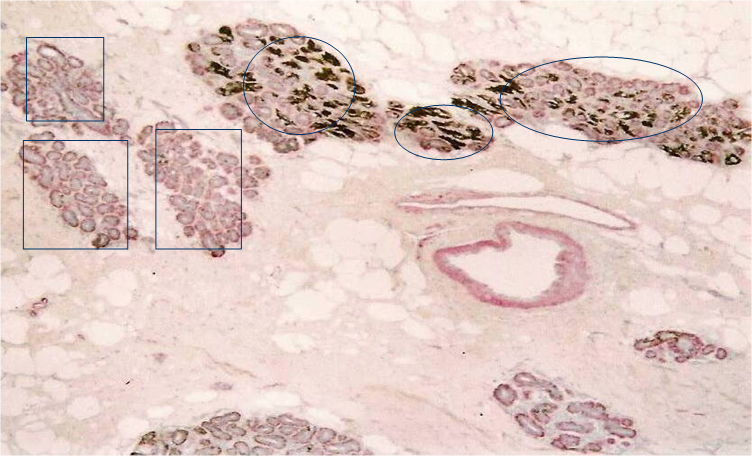 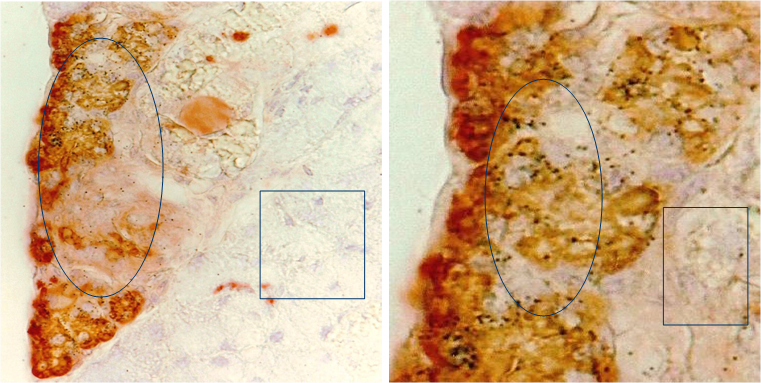 The clonal evolution theory is also supported by several lines of evidence, including:

With a double immunohistochemical method, our previous studies revealed that a subset of ER-positive pre-invasive breast tumors harbored focal disruptions in their myoepithelial cell layers. Over 86% of these disruptions were overlaid by ER-negative cell clusters, but adjacent cells within the tumor core were ER-positive [15-18] (Fig 7). The size of ER-negative cell clusters appeared to increase with tumor progression. The tumor cells at the tip of these clusters gradually regained ER expression, but the cells near the tumor core were consistently devoid of ER expression (Fig 7b). 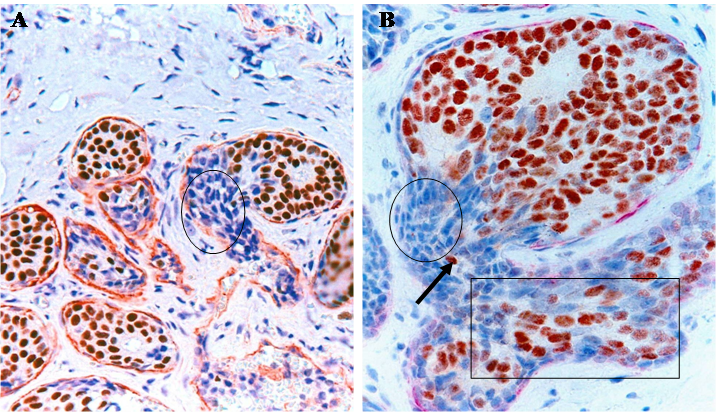 B. “Budding” cell clusters and cells within tumor cores have a different molecular profile

Molecular analyses with microdissected “budding” cells and adjacent cells within the tumor core detected a markedly different rate of LOH and expression of invasion-related genes [17] (Fig 8).

If further validated, these theories and findings could have significant scientific and clinical implications. Scientifically, in order to identify the trigger factor(s) shared by all or most subtypes of breast cancers for their invasion and metastasis, a novel target highly representative to all or most subtypes is apparently needed to be elucidated, so that further studies could be carried out in comparable tissue samples. Clinically, breast cancers derived from clonal evolution are very likely to be more problematic for early detection and intervention for two main reasons:

A. Tumor invasion or metastasis may occur at normal or hyperplastic stages

Our recent studies in nearly 1,000 cases of breast cancer have consistently shown that a subset of normal or hyperplastic breast duct clusters show malignancy-associated changes, including focal disruptions in the surrounding myoepithelial cell layer and basement membrane, expression of p53 and HER-2, morphological signs of stromal and vascular invasion [19,20] (Fig 9). These duct clusters may progress directly into invasive or metastatic lesions. 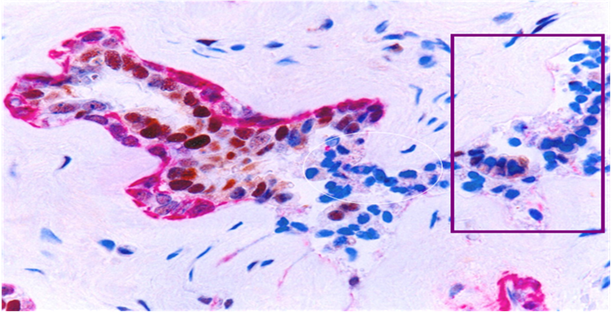 B. ER-negative cell clusters may represent “seeds” for drug resistant and recurrent tumors

Our recent studies have consistently shown that ER-negative cells overlying focally disrupted myoepithelial cell layers are generally arranged as tongue- or finger-like projections invading the adjacent stromal tissue or vascular structures [15-18]. The size of these ER-negative cell clusters increased with tumor progression, and an increasing number of ER-positive cells were seen at the tips of these projections. In contrast, the ER-negative cell clusters overlying focally disrupted myoepithelial cell layers near the tumor core were consistently devoid of ER expression (Fig 10). These findings suggest these ER-negative cell clusters are likely to represent a population of a more aggressive cell clone that is under clonal evolution. Since these “budding” cells near the tumor core are consistently devoid of ER expression, they are unlikely to respond to tamoxifen and other hormonal-based therapies, representing “seeds” for drug resistant and recurrent breast tumors. 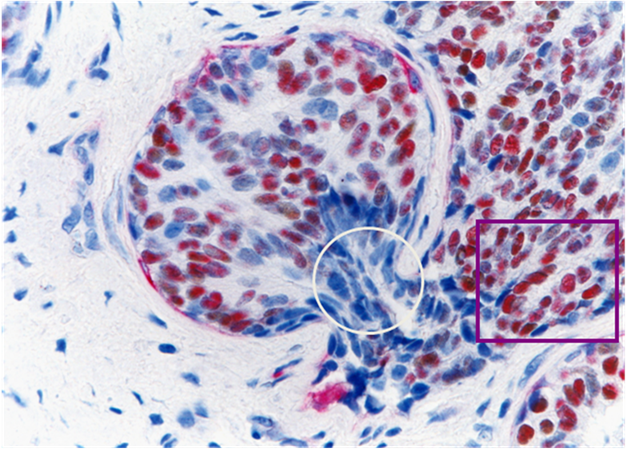 This study was supported in part by grant 2006CB910505 from the Ministry of Chinese Science and Technology Department, grant 30801176 from The National Natural Science Foundation of China, grants DAMD17-01-1-0129 and DAMD17-01-1-0130 from Congressionally Directed Medical Research Programs, grant BCTR0706983 from The Susan G. Komen Breast Cancer Foundation, and grant 2008-02 from US Military Cancer Institute and Henry M. Jackson Foundation.